In ninth grade, I read Shakespeare’s Romeo and Juliet. I don’t remember much about what we learned except summary, and that we watched the 1996 Baz Luhrmann film adaptation Romeo + Juliet. Everyone in my class thought the plot was ridiculous—two immature teenagers committing suicide because they can’t be together, falling in love after one meeting?—and that the movie was bizarre. Why is Elizabethan English being thrown into modern-day Miami, with guns, a drag queen, and expensive cars? What made Romeo and Juliet beautiful was lost on my peers, and quite frankly, I couldn’t grasp what made this play so classic, either.

Maybe it was my preconception of over-dramatized romance that made me turn my nose up at Romeo and Juliet when I was in high school. Maybe I wanted to be cooler than that or just feel like love was something that couldn’t touch me or make me feel like I could be swept up into something transcendent. Romeo and Juliet idealized sacrificial love, and young love, for centuries after its premiere in 1597, and continues to permeate popular culture. My inability to get past this roadblock prevented me from identifying other important themes blatant in this play. After my reread, I was surprised to find that the theme that interested me the most wasn’t young love—it was masculinity.

It took me six years to finally reread Romeo and Juliet, as I did just a couple of weeks ago for my Shakespeare and film class. I finally understood the beginnings of what makes this classic so…classic. We read the play in tandem with the film Romeo + Juliet (1996), and my collegiate reading and viewing convinced me that everyone needs to reread this play (and watch Luhrmann’s adaptation immediately after).

Now, Shakespeare was no feminist. Once you’ve read Taming of the Shrew, literally a play about men marrying strong women to break them down (“tame them”), this becomes abundantly clear. In Romeo and Juliet, however, Shakespeare clearly critiques the toxic masculinity that the young Montague and Capulet boys represent. He links tragic events of the play to the male characters’ displays of violence, such as Tybalt and Mercutio’s deaths. Luhrmann, interestingly (and I think brilliantly) maintains this theme in the film—the machismo of the Montague and Capulet boys in undeniable—in contrast to the representation of Mercutio as a drag queen. Luhrmann decides to emphasize the poisonous effects of potentially violent maleness in conjunction with strong femininity.

The use of drag in Baz Luhrmann’s adaptation encourages a view of powerful femininity by taking something historically negative (femininity) and translating it into something to celebrate and applaud. Admittedly, in ninth grade, being gay wasn’t something people talked about at my school. And being a drag queen? I don’t think we even understood what that meant. I remember watching Mercutio lip-sync in women’s clothing to “Young Hearts” and thinking it was odd, unable to interpret why he was doing it—or perhaps feeling so uncomfortable that I was unwilling to think about the why of it. In a college setting, where you come across different and interesting new people every day, you’re free to ask the question why. After rewatching this movie, I found myself asking many questions and genuinely wanting to know the answers: Why was femininity something Baz Luhrmann felt was important to emphasize, and why did he show that through drag? Why was everything fast-paced, energetic, neon, unforgiving? Why did Romeo and Juliet keep falling into a big pool of water? 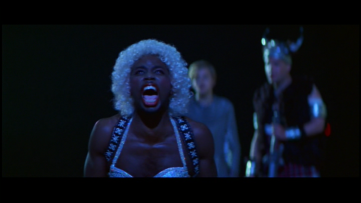 In college, the way we learn changes—it’s no longer just about learning the material, it’s about comprehension, analysis, pulling material apart and putting it back together to create our own understanding. To put it simply, we exercise our critical thinking skills. I think it’s important to reevaluate this film and its source text after high school, to rediscover the themes that make Romeo and Juliet so persistent—enduring love, individualism, societal constraints, sexuality, and male violence. My rereading allowed me to genuinely enjoy the play, in all of its over-the-top romance and machismo and tragedy. Re-watching the movie allowed me to ask the questions I wasn’t willing to ask when I was younger, and appreciate the brilliant acting of Claire Danes as Juliet and Leonardo DiCaprio as Romeo. Maybe when you think of Shakespeare, you don’t think of the modern mode of gender, and you probably shouldn’t—but the new ways in which I thought of the play made the reread (and re-watch) worth it.